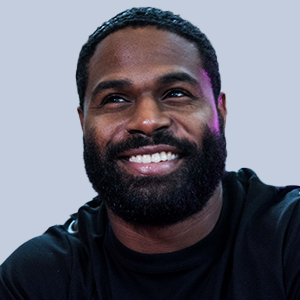 In high school William was named to the Rival-Net All-American Football Team which made him the top ranked running back in all the USA.

He played his college football for Boston College University, where he was named the two time MVP and All time top rusher. William was also named to the College All American Team, as the top rated running back in all college football.

During the NFL draft William was ranked the number one running back on the board, and was chosen in the first round by a team called the Cleveland Browns. William achieved many accolades while in the NFL including Team MVP and runner up for rookie of the year.

Today William is a full time motivational speaker. He travels world wide captivating audiences of students and adults alike. William learned first hand that champions don’t give up they get up.

William had a very challenged childhood growing up in the hard knock town of Atlantic city were he lost both his parents by the age of fourteen. He realized the key to his success would come from what he calls the two E’s to success that he shares with students all around the country (effort and education).Family William reminds his audiences that in life it’s not about how you start but how you finish. He uses his NFL rookie year as a prime example. William began to make some bad choices and mistakes. “The pain of my up bringing began to catch up with me and as an unguided young man I didn’t know how to deal with it, that is why I decided to dedicate my life after Football to
guiding and inspiring our next generation”

The greatest part about football is that it has a first half and a second half. William had a tough first half during his first year in the NFL. But the second half of his NFL career was a success where he became well liked and respected on the field and in the community where he is very interactive.