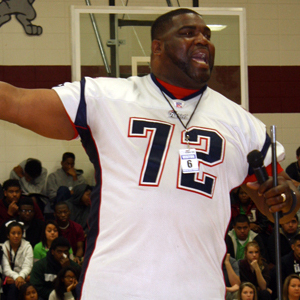 On Sundays, when the television screen would fill up with big men playing football and looking like true heroes, Devin Wyman made a commitment to himself that he would be in their place someday. Many adolescent males do the same, but Wyman’s promise had weight, literally, behind it. He came into the world exceptionally large, 10 pounds of baby destined to boost his mother’s grocery-store bills for years.

In his teens, he devoured opponents in football and wrestling. He reached 6 feet 7 inches and drove scale needles in circles beyond 300 pounds. He felt justified in promising that he would soon be on television. While Wyman’s body grew in the right direction, but his mind was irresponsible and could be reckless. Aimlessness took him in the wrong direction and he spent at least a year in the wrong crowd before accountability arrived.

On an August morning, the evening news ran the footage of Wyman in handcuffs. Unfortunately, that was how he made his television debut, not as a hero but as a display of dishonor to his mother and community. It wasn’t until four years later when Wyman would make his second TV appearance. This time he had become Devin Wyman, No. 72, for the New England Patriots.

Shoulder pads didn’t transform Wyman into a hero, he consistently fell somewhere in between the two extremes. He was a work-in-progress, partly hard-earned and partly given to him by caring and willful educators. His first half of life may have been full with struggles, but his second half has been packed with opportunities to make him the positive role model in he has transformed into today.