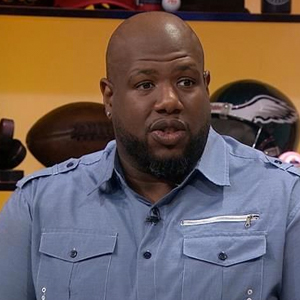 Barrett Brooks wanted to be an NBA player or work for the Post Office like half his family.

Barrett’s mother made him play basketball to keep him off the streets of Kinlock, St. Louis, Kinloch. At the time Kinloch, a suburb of St. Louis, had the 5th highest crime rate per capita in the country. “Basketball was my favorite sport, but gravity took over, and two hamburgers later, Brooks was 6’ 4” 246 pounds.”

Barrett received a full ride football scholarship to Kansas State University (KSU). He said he only attended KSU, because they allowed him to play basketball as well.  When Barrett began at KSU, the team was ranked 106 out of 107 NCAA Division I football teams. The next four years KSU was ranked in the top 12 in the country and went to three Bowl Games. During his tenure at KSU he was name All Big 8 and an All-American.

Brooks was drafted by the Philadelphia Eagles in the second round. He was the 58th overall pick. The Eagles acquired early success, going to the play-offs two out of the four years he was there. He then played for the Detroit Lions, Green Bay Packers and the New York Giants. After leaving the Big Apple, he was picked up by the Pittsburgh Steelers. Brooks played there for four years and eventually won Super Bowl “XL”. This was a fitting end to a blessed 12 year career in the NFL.  Barrett is currently a motivational speaker, and is spreading the message of hope and determination to youth across America.