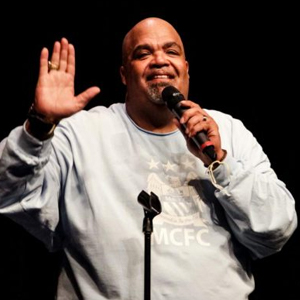 Reggie Dabbs has been speaking to students in public schools for the past 30 years. Many people have called him one of the top Public School Speaker in America and every year he speaks to millions of teenagers.

Today’s generation is facing unparalleled hurts, pressures and choices. If we can heal those hurts, help in times of pressure and equip students in their choices, we will have better students and a positive school atmosphere. That is where I can help assist you with this school assembly presentation. I share with students often, “You can’t change your past, but you can change your future.” With all that students are facing, we must give them hope.

Born to an unwed teenager who at one time considered abortion as a viable option for solving her “problem,” Reggie Dabbs considers himself fortunate to be alive.  Raised by foster parents, Reggie understands what it is like for kids who are struggling with adversity.

When addressing a school assembly, Reggie talks to the kids in a humorous style about choices each of them has when faced with drugs, alcohol, suicide, etc. Reggie tells his audience that he never smoked a cigarette, never did drugs, never drank alcohol, because he chose not to.  He assures them that they can make the same kinds of choices.

Reggie talks to kids about family and how thankful they should be that they have families. He talks to them about dating relationships and emphasizes that virginity is the most honorable choice. Most of all, Reggie drives home the fact that, “You can never change your past, but you can change your future!”

From being a “Problem” to an unwed teenager, Reggie is fast becoming one of the most in-demand speakers who help teenagers meet their problems head-on and overcome them. Ranked as one of the #1 High School Speaker in America by the NEA.

My family and I have committed our lives to make a positive difference in the lives of young people. I would consider it an honor to partner with you and your school’s goal of building better students.

Check out more on Reggie Dabbs at reggiedabbsonline.com